Click on the project name below to view the 2016 NPS AMD project report:
Current Acid Mine Drainage Projects 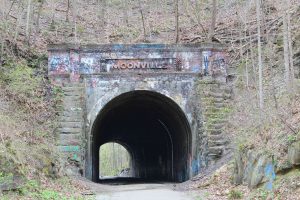 The Moonville Rail Trail is a popular tourist destination in Vinton/Athens County, especially near the Moonville and King Hollow Tunnels. Thus, demand is high for use of this rail trail. Access to the historic tunnels and the remainder of the rail trail is difficult for many visitors and impossible for bicyclists and other users of the rail trail because the bridges across Hewett Fork were removed by the previous railroad owner. High water also provides a hazard to those who cross the creek in order to continue their journey along the rail trail. Design and construction of 7 new bridges across Hewett Fork, along the rail trial will open 8.5 miles of trail from Zaleski to just west of Mineral, Ohio. 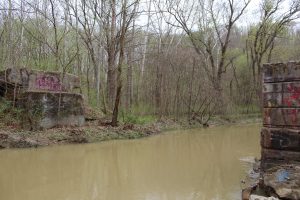 In addition to bridge construction, 8 AML features will be addressed by mitigating the public health and safety hazards. These mine features are located on the Zaleski State Forest, adjacent to the Moonville Rail Trail and are a result of historic underground mining of the Middle Kittanning Coal (No. 6 Seam). Valley Coal Company’s No.1 Mine was abandoned in 1909. Specifically, there are 8 Priority 2 Portals that are accessible by humans and pose a danger due to their location on public property. The two main components of this project (bridge construction and addressing dangerous mine features) are complementary to each other since hazardous features will be removed from the landscape that will likely see increased visitation from the nearby rail trail improvements.

The Ilesboro Road Reclamation Project is within the West Branch of Raccoon Creek.  The West Branch contains many reclaimed ridge top surface mines, though a group of abandoned surface mine sites on the western watershed boundary with Brushy Creek still impair the watershed.  Historic surface mining (Middle Kittanning Coal, No. 6) was conducted during the 1950’s. The strip-mined area is identified on the New Plymouth Ohio USGS 7.5’ quadrangle map published in 1961 and revised in 1975, 1985 and 1992.   Ilesboro Road Reclamation Project is located within West Branch of Raccoon Creek subwatershed.  The proposed project consists of approximately 34 acres of abandoned coal mine spoil. Two large pits that contain approximately 2 million gallons of AMD seep through the spoil and then as seepage from the hillside along the coal pit floor. Typical water quality in the pits and subsequent tributary drainage is: pH between 3.17-4.36, acidity from 71-337 mg/l, iron from 0.05-1.12 mg/l, and aluminum from 8.69-49.4 mg/l.  Aluminum is the dominant AMD metal present, likely due to the large presence of shales and clays in the spoil.  Streams in the project area are clogged with sediment and spoil that have been deposited from the unreclaimed surface mine.  Remediation of this site (composed of coal mine spoil and strip pits) will eliminate these direct inputs of AMD and sediment into West Branch of Raccoon Creek. In addition to the environmental benefits, this project encompasses Priority 2 Dangerous Spoil Piles which will be removed from the site as a result of the project. 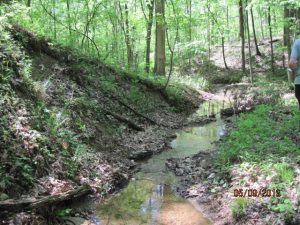 The Ilesboro Road Reclamation Project was awarded to Ohio Erie Excavating, LLC, and is expected to begin February 5, 2018.  The two strip pits will be drained and filled with onsite material. Next, the spoil will be graded to obtain positive drainage, pre-limed at 20 tons/acre, capped with 1-2 feet of suitable resoil material (from an adjacent borrow area) and revegetated, thus preventing the formation of Acid Mine Drainage (AMD). Open limestone channels will convey water off of the site and into the receiving tributaries. Long term operation and treatment costs are not anticipated with this project.

The Ilesboro Road Reclamation Project is completed. The project minimizes the formation of acid mine drainage from this pre-law ridgetop surface mine site. This will reduce the acidity and metal load entering the West Branch of Raccoon Creek. 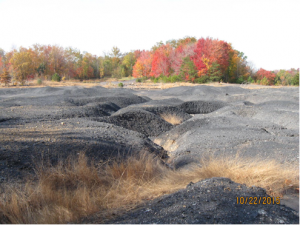 The Daniels AMD Reclamation Project is located in Milton Township, Jackson County, within the Little Raccoon Creek Watershed which has been adversely affected by historic abandoned coal mines. This historic mining has resulted in the formation of Acid Mine Drainage (AMD) and sediment deposition to four tributaries draining into Little Raccoon Creek. Typical water quality in the pits and subsequent tributary drainage is pH between 3.1-3.5, acidity from 136-287 mg/l, iron from 2.0-18.4 mg/l, and aluminum from 16.0-31.3 mg/l. Remediation of this 10 acre site composed of coal mine spoil and strip pits will eliminate these direct inputs of AMD and sediment into Little Raccoon Creek. In addition to the environmental benefits this project encompasses a Priority 2 Dangerous Spoil Pile which will be removed from the site as a result of the project. 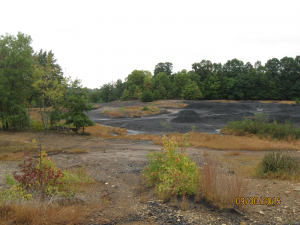 The project will drain and fill two strip pits and regrade 10 acres of land to allow positive drainage.  Lime will be mixed into the spoil, and then the spoil will be covered with about two inches of resoil material.  The entire project area will be revegetated, and the adjacent borrow area will be planted with tree seedlings to match its preconstruction land use.  Three rock channels will be installed to connect side drainages to their main channels.

This project is complete.  The two pits have been drained and the spoil graded in order to obtain positive drainage.  The spoil was prelimed at 20 tons/acre, capped with resoil material, and seeded with a native seed mix developed for The Wilds.  In the spring of 2019, trees will be planted along the tributary draining the site.

Other Projects in the Watershed

This project was scheduled for a fall 2018 start date but has been postponed due to rain.  The Big Sandy Run Low-head Dam Removal project in Vinton County is located just upstream of Lake Hope, on Zaleski State Forest property. The project is funded by a Section 319 (h) Nonpoint Source Grant (Ohio EPA) and ODNR Division of Forestry is conducting the dam removal.  This low-head dam (composed of 2 concrete structures), originally a component of the 1980 Lake Hope underground mine sealing project, acts as a barrier to fish passage and degrades aquatic habitat in Big Sandy Run. Preliminary biological sampling confirmed that many species of fish are not able to move upstream of the dam. Twelve species of fish were documented at the two sampling sites downstream of the dam, with only four species occurring at the two sites upstream of the dam.  Removing the center 50% of the concrete structures will allow fish passage to upstream habitats and will help to return the stream morphology to a more natural state.

You can also view annotated 360° photos of our current projects at  http://watersheddata.com/Education/Stream1.html